On March 1st 1954 the Adelaide Advertiser reported that; “An earthquake shook Adelaide and a large area of South Australia for 20 seconds from 3.40am this morning, causing minor damage to buildings and shocking the population. 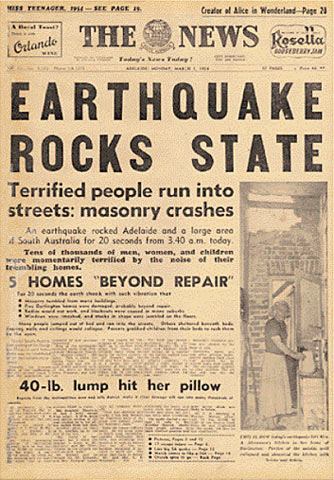 Thousands of men, women and children were momentarily terrified by the noise of trembling homes.

Celebrated South Australian geologist (Sir Douglas Mawson) said there was no likelihood of an immediate occurrence.  “I would classify it as an earthquake rather than a tremor. It was more severe than what we normally call an earth tremor,” Sir Douglas said.

The area of the tremor extended north from Penneshaw (Kangaroo Island) to Melrose — nearly 250 miles”.

I don’t remember much about the actual quake but I do recall the amount of discussion it created and the news headlines in the papers at the time.

Of course there is a known “fault line” in South Australia and the tremor followed that line pretty closely. According to the newspaper report “It was caused by the slippage of one-great rock layer on to another along the “fault line.” probably many miles beneath the earth’s surface.

Sir Douglas Mawson said “the fall may have been only two or three inches, but untold millions’ of tons of rocks slipping and grinding on either side set up intense vibration

For 20 seconds the earth shook with such vibration that masonry tumbled from many buildings. Blackouts were caused in many parts of the metropolitan area. Radios were cut off the air. Windows were smashed and stock in some shops became jumbled in a heap on the floors.

Many people jumped from bed and ran into the streets.

Others sheltered beneath beds, fearing walls and ceilings would collapse.

Parents grabbed children from their beds to rush them to the open.

Probably the greatest effect of the earthquake was the nervous shock it gave the population, unprepared by any previous experience. The telephone system became choked with the rush of calls. Electricity, water, gas, and other services immediately checked their plant and premises, but no serious faults were located.

The earthquake occurred in clear weather. The air was still and the sky cloud-less. It precipitated a barrage of calls to the Weather Bureau, chiefly from people anxious to know whether another and more severe shock was likely to follow.

In Gawler Place, the terrifying crash of glass followed the tremor. Panes from 12 windows of the five-storied Agriculture Building fell into the street.

In Selbourne Chambers, Pirie Street, the top of a block of four brick chimneys crashed on to the roof and the footpath. At the Oddfellow’s Hall in Franklin Street, part of a moulded hand holding a heart on the top of the building, broke away and smashed an electric sign above the footpath.

Thousands who left their beds and switched on the radio, found reassurance in the calm voice of 5KA announcer Jack Fox, who, although he had had one of the worst experiences, allayed the fears of many.

He was showered with plaster from the studio ceiling, his cup of tea was jostled from the saucer and spilt over a turntable, and all the lights failed.

The station went off the air for three minutes until the auxiliary power plant was started.

Mr Fox told listeners later: “I groped my way out of the window, thinking

our 180 foot mast had  crashed. Then we thought the steeple had fallen.”

When dawn broke, it was discovered that bricks had fallen from the top of the steeple. The spire was still standing, but half of the top rim was a gaping hole”.

There have been some minor earthquakes since 1954 but none have caused anywhere near the damage of that ’54 quake.

Adelaide Remember When Blog
Lollies From a Bygone Era

10 Responses to The Earthquake That Shook Adelaide 1954