By Bob Byrne on November 19, 2014 in Childhood Memories, Events

Back in 1979, Brian Doddridge was just 14 years old and thought that pigs might fly. Well, at least his pig.

Brian had entered the Channel 10 annual Adelaide Birdman Rally and, with the help of some friends and family, had created what he planned to be a giant pig that would fly. 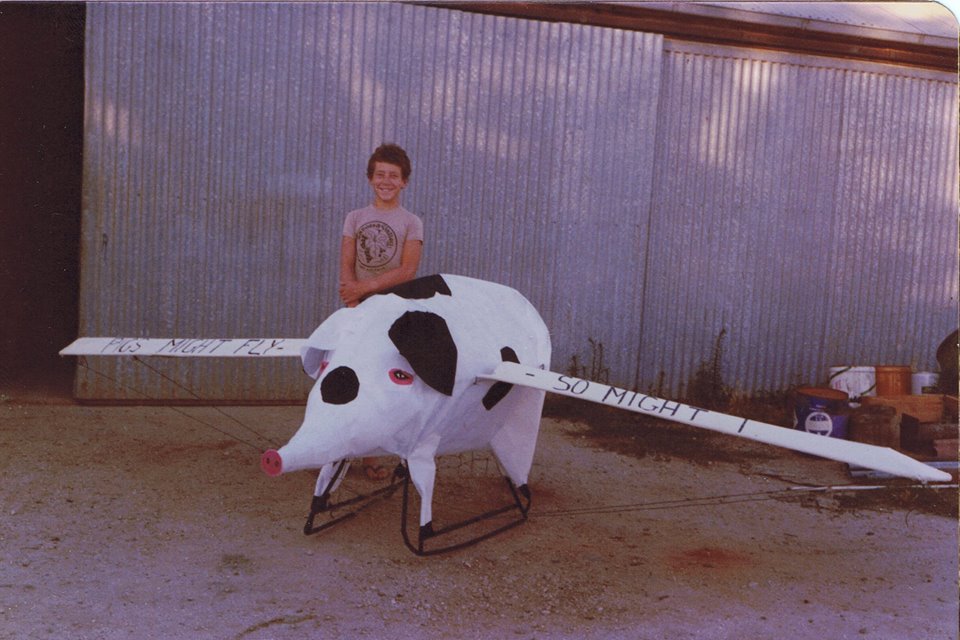 The rally was an annual event and the first Birdmen flew over the Torrens lake in April 1975. It was originally conceived as a fundraiser for the Channel 10 Christmas appeal, with all proceeds going to the Children’s Medical Research Foundation.

The success of that first event even surprised the TV channel when, on the day, 25,000 spectators turned up on the banks of the River Torrens to watch the intrepid contestants attempt to fly or glide for a distance of 50 metres over the water after a running takeoff from a 6 metre high platform.

Prizemoney of $5000 was offered to the first birdman to make the distance.

Twenty hopeful would-be flyers lined up with a range of gizmos and contraptions made from all sorts of bits and pieces, including bicycle parts, umbrellas, balsa wood wings and kites, as they tried to flap, glide or float on air over the distance.

The huge success of the day created a problem. The large crowd had caused a great deal of damage to the water’s edge, with natural vegetation disturbed and literally tons of litter left behind. 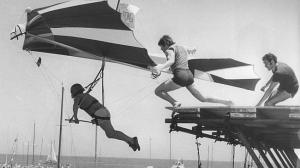 Although it was an enormous success, and the people of Adelaide had voted with their feet, it was decided that future Birdman rallies would be held at the beach at Glenelg.

So the following year and each year thereafter, the Birdmen and women turned up at the Bay to try their luck at flying like a bird, sailing through the air or gliding like an eagle on outstretched wings. Most of the homemade contrivances didn’t fly at all, and participants simply dropped like a stone from the jetty into the water.

Some would dress up in novelty costumes, such as a chicken suit or with top hat and tails, to make their attempted flight a bit more colourful and entertaining.

Trevor Clements recalls that he would anchor his boat just off the jetty for the whole day along with dozens of others, and with family and friends, watch the crazy antics of the contenders.

Graham Earris remembers riding his pushbike to the beach to watch: “I’m not sure it could even happen today, people jumping off a jetty with ridiculous costumes on hang gliders and the only safety precaution, a boat standing by to pull them out of the water. Fantastic stuff though”.

Perhaps he’s right. For whatever reason, the last Birdman Rally took place at Glenelg in 1986. 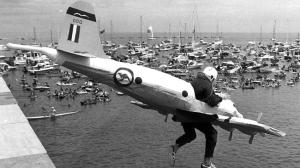 There’s been a couple of half-hearted attempts to get the Birdman Rally going again with former Glenelg Mayor Ken Rollond suggesting at one stage “If they can have a Birdman Rally in Melbourne (on the Yarra River as part of the Moomba Festival), I don’t see why we can’t have one here.”

So, like Brian Doddridge, who believed and hoped that one day his pig would soar like an eagle and finally show everyone that pigs can fly, we too can only live in hope that the Holdfast Bay City Council will one day find a reason to reintroduce this truly popular family event again.

Don’t hold your breath though, Brian’s pig dropped like a brick.

More Memories of the “Pughole”
George and Friends at the Adelaide Zoo.

One Response to ‘Pigs Might Fly’ in the Birdman Rally