WHEN they first arrived in South Australia on July 25, 1994, poker machines immediately killed off a thriving little tourism industry known as “the pokies tours”.

Those who were keen to revel in the heady thrill of legally pursuing a form of gambling that was illegal at home could take an organised poker machine tour and play the one-armed bandits to their heart’s content just over the border in NSW. Almost every long weekend and on some regular weekends, hundreds of people would board chartered buses and trains headed for the mini-Las Vegas towns of Wentworth, Dareton, Tooleybuc and Broken Hill. 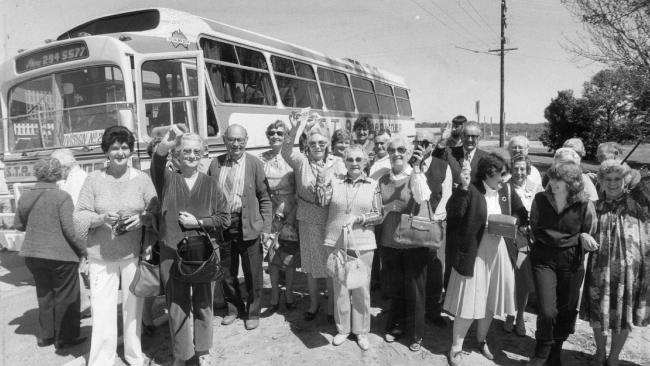 Off for a fun weekend. People about to board a bus to take them to a daytrip pokies tour to the Coomealla Memorial Club in Dareton, in 1983.

Clubs such as the Coomealla Club, the Wentworth and the Tooleybuc Sporting Club grew fat on pokies income and bragged of facilities and entertainment that were the envy of licensed venues in Adelaide as those of us from across the border were drawn like moths to the flame.

The excitement began from the moment the tour got under way with on-board entertainers or the tour host encouraging crowd singalongs, telling jokes and stories and creating the atmosphere and promise of an engaging weekend. The drinks flowed freely and the mood was high.

And it was a pretty cheap weekend: $25 return for the bus ride, which included a boat trip on the Murray, lunch at the RSL, free entry into the club with its cheap meals, entertainment and dance band. There was always the chance, too, of winning the cost of accommodation and the whole weekend away with one “lucky” pull of the handle. The 10c poker machines from that era with their single mechanical arm seem far less ominous than the modern-day push button ogres that lurk in the pubs now and gobble up dollar coins at an insatiable rate. 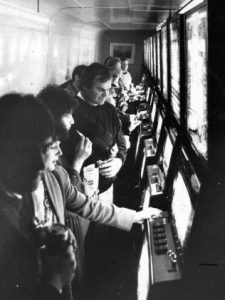 People play the pokies on the ‘Pokies Special’ train from Keswick to Broken Hill, 1989.

Of course, there were still winners and losers on every trip and though they were promoted as “pokies tours” there was plenty of other entertainment available.

Many patrons spent Saturday afternoon on the machines, followed that up with the cheap buffet meal in the dining room and then spent the evening on the dance floor or enjoying the headline act in the main auditorium.

There was drinking, wining and dining, entertainment, laughter, lasting friendships were made and it seems, on the surface at least, a harmless weekend of pleasure and fun for all.

When poker machines were introduced to SA 23 years ago, the attraction of the weekend pokies tours quickly disappeared, and within a few months had mostly stopped completely. Some of the clubs began to feel the pinch almost immediately and within a few years the Wentworth Club closed its doors.

The success and almost innocent enjoyment of pokies tours may have even played a small role in poker machines finally being introduced into South Australia.

Members of State Parliament at the time who had a vote on the introduction of the machines, had witnessed first-hand how members of the public and even their own family members enjoyed their pokies weekends away. Some were quoted as saying that their mothers would regularly catch the bus or train to Tooleybuc or Wentworth with a group of other women. They would sit on the bus and have a good chat, have a great day out and spend some time at one of the clubs and play some pokies, but when the pokies came to Adelaide they never actually played. It was really more the weekend away, the friendships established and the whole social experience rather than just the one-armed bandits.

It has now been more than two decades since the launch of poker machines in our state and debate still rages over whether it has been beneficial or damaging. Welfare advocates argue that the social cost has been massive with billions of dollars being fed into the machines wreaking havoc on the health and welfare of those who become addicted.

Supporters point out that 99 per cent of people who enjoy an occasional flutter should not be penalised because of the small numbers of problem gamblers. 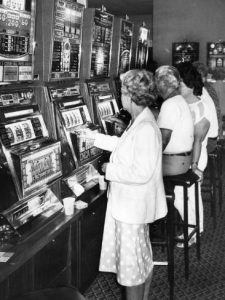 Pokies tour passengers play the poker machines in the Coomealla Memorial Club at Dareton, just over the NSW border, in 1987.

Political careers have been built or have stumbled around the pokies and Australian band The Whitlams even produced a hit song, Blow Up The Pokies, with the following lyrics:

“And I wish, I wish I knew the right words

To blow up the pokies and

’Cause they’re taking the food off your table

So they can say that the trains run on time.”

When I introduced the subject of the pokies tours on my Adelaide Remember When Facebook blog recently, most readers remembered only the good times they had, the trip, laughter and ongoing friendships; “Some won and some lost but everyone had such a great time, so much fun. Those were the days”!!