Last year ABC TV was running a weekly series titled “Who’s Been Sleeping In My House?”

The premise of the series was an archaeologist would travel to various old buildings and homes around Australia and find out some of their history.
During the term of the programme they did a story relating to a house with a mysterious past in Adelaide.
The story was that the house was the location of a radio station which was shut down during World War 2 for sending radio messages to the German warships about the movement of troop ships leaving Australia for the war. They carried on about a secret transmitter in the roof etc….but never got near the real truth. The radio station in question was 5KA and the house was the original home of the radio station, a house in Kintore Avenue in (now) Prospect
I worked for the 5KA network for 5 years and this is my understanding of what really happened. Early in 1940, broadcasting regulations were altered and all broadcasts were censored and weather reports banned totally. The govt was also concerned about pacifists. 5KA was owned by the Jehovah Witness Church and they were against war. In 1941, the Naval Department closed 5KA. the reasons given, but not made public, was that Victoria Reynolds, Social Editor of The Advertiser, had allegedly said on air “as I was coming to work today, I met Gordon March, you remember him, he used to be Manager of 5DN, and by jove didn’t he look magnificent in his naval uniform. He was going to Port Adelaide to go aboard his mine sweeper and he asked me to give you all his kind regards”. Following the closure the Government removed the license of the station. The Church appealed to the High Court, but lost the case. 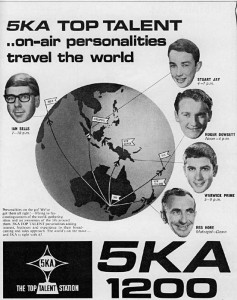 Wild rumours abounded as to why the station was closed. Radio 5AU, a regional station in Port Augusta which was also owned by the church, was also shut down at the same time. The suggestion there was that every time a ship left the port, 5AU played the song “Red Sails in the Sunset” to alert German spys. Nothing was ever proven regarding the rumour but 5AU was also taken off the air.
5KA reopened in December 1943, now owned by the Methodist Church and the Labour Party. By 1954, general opinion was the Jehovah’s Witness Church had been extremely hard done by, but I believe no compensation was ever paid.
Some of the stars from 5KA in the mid 60s included Warwick Prime on breakfast, Roger Dowsett from noon to 4pm, Stuart Jay on drive, Ian Sells ‘Loco’ show and Reg Hoare mid dawns.

7 Responses to Who’s Been Sleeping in My House. The 5KA Story