By Bob Byrne on October 1, 2014 in Childhood Memories

I was reminded recently that as kids we used to collect and swap footy cards that came in the breakfast cereal box.

A Sunday Mail story told of how; “Parents are going to extreme lengths to get their hands on the latest-and hottest-children’s craze. Seemingly innocuous little green animal trading cards that have whipped school playgrounds into a frenzy”.

I’m reminded of that old saying “everything is different, yet everything remains the same”. I remember when as a kid at school we had a trade going in footy cards from Harpers Easi Oats porridge packets. The main difference between then and now of course is, my parents would never have been swapping them for me or trying to buy cards for me on Ebay or Gumtree! (I have a recollection though that they did get me the album to stick the cards in). We used to swap the cards at school each day, “I’ll swap you a Bob Hanks for a Lindsay Head”, until we had the full collection. Funny though that there were always a few cards in very short supply, always hard to find and they would be the best cards to get.

Nick Haines from the ARW Facebook page commented “I missed the Easi Oats cards as a kid. My generation got the Mobil and Kelloggs cards. I’ve since collected all the North Adelaide Easi Oats cards – at a pretty penny mind you”.

Graham MacIntyre  remembered  that in the the Twistie packets you used to get a footy pin of your favorite team. “Also in Amscol Ice Cream tins you used to get footy ribbons, but my favorite was the coke lids where you’d pull the cork out and underneath it had a TV show person and you stuck it on a Coke mat which had all the popular shows of the time

Don Nankivell also reminded me of the Coke lid collections; “I remember growing up in the 60’s , Coca Cola put out collectable lids. You would scratch out the cork from inside the lids and a drawing of an SANFL footballer would be visible. I think they were then pasted onto a piece of cardboard. 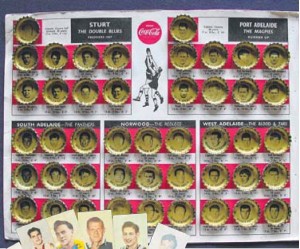 Photo from the Advertiser. Scratch out the cork and there would be an SANFL footy player

Peter Ciganovic  also remembered the Coke tops “there was a collection of SANFL footy stars, under the cork lined caps of Coke bottle tops. The cork layer was hard to get off without scratching the photo underneath. Barry Robran was the rarest cap. The tops had to be glued into an official cardboard holder, in following years they had TV show bottle caps like Colonel Hogan from Hogans Heroes, after that they had a Peanuts collection of caps. You can find the original footy caps collection on ebay for about $1000.”

My grandson now has a footy card collection which he keeps very neatly in an album, all marketed and sold by the AFL of course with no waiting to open the next packet of porridge to see which player you can add to your collection.

Did you collect footy cards or the Coke bottle lids as a kid?

Going to the Drive-In Pictures.
Hoadley’s Battle of the Sounds