Robert Verrall posted on the ARW Facebook page recently of some strong memories from his childhood years; “In the early 1970s we’d go to Edithburgh during holidays to stay with Nanna. She had the very first cottage you saw heading into the town. Easter was nearly always spent down there. My brother and I would walk down to the little swimming pool area they had there or we’d go fishing. In the evening we’d run back and forth across the road and see how many times we could do it before a car came along. We were always careful never to run in front of the cars though. On the way there and back I’d count the stobie poles or give them names. That drove my brother nuts. In the late seventies and early eighties we’d go to the Comic Court Lodge Caravan Park before moving over to the Normanville Caravan Park. At least the Comic Court Park had a little arcade area with pinball machines or we could go horse riding or running around the sand hills, there was never much to do in town. By age fifteen I found the whole aspect of going on family driving holidays excruciatingly boring so I stopped going”. 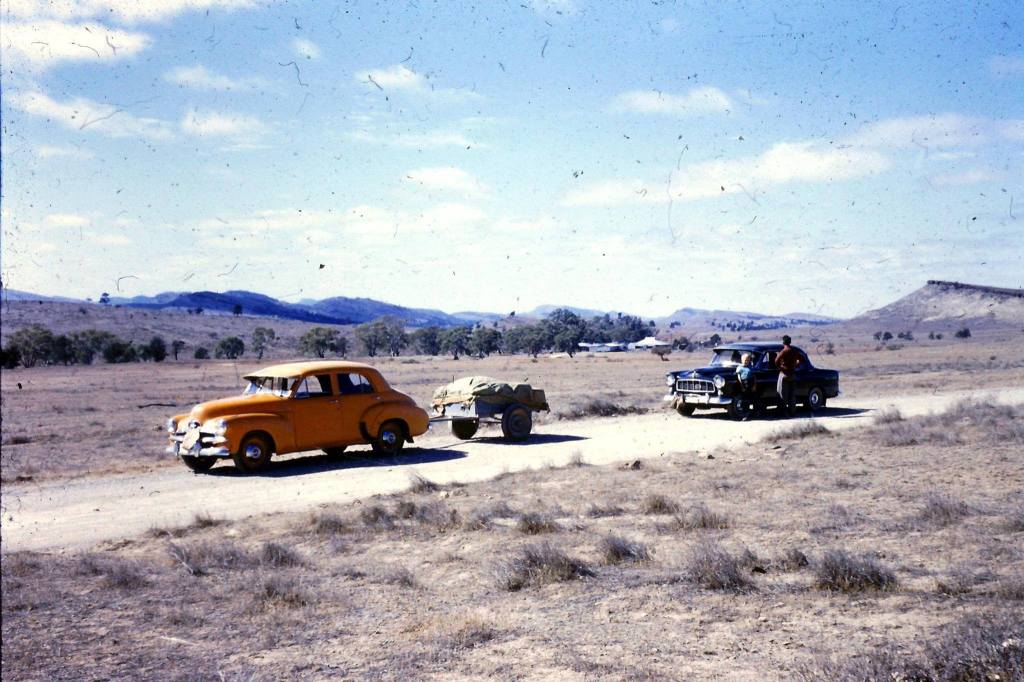 Kenny Peplow shared this photo; “Dad’s FJ taxi (with water bag on the front) returns from a trip in the Flinders Ranges. As a kid where did your family take it’s holidays?”

Each of us has memories of childhood holidays and they generally include long road trips by car, sometimes with a caravan in tow, and the only entertainment provided by mum, usually seated in the front seat next to dad as he drove the car on to the destination.

My own recollections of childhood school holidays includes mile after mile on the gravel roads of Pitchi Ritchi Pass as it wound its way through the beautiful Finders Ranges through Quorn, Hawker and on to Wilpena Pound, big old cast iron beds with steel springs and flocking mattresses, the smell of lavender from the little lavender bags in heavy old wardrobes and chests of drawers.

There was always an old maiden aunt who had to be visited and she smelled of powder and made a pot of tea, served in china cups with home-made biscuits and buttered jubilee cake.

So much has changed now with the family touring holiday. Cars are bigger, more comfortable and fitted with all the latest safety equipment, seat belts for all, air conditioning and some even have individual DVD screens for the children in the back seats. There is of course iPads and iPhones, tablets or hand held mini-computers on which to watch movies, play games and listen to music.

What are some of your childhood memories of those family motoring holidays?

Remember When The Trams Ran Everywhere
Going to the Drive-In Pictures.

One Response to Childhood Memories of Those Motoring Holidays