By Bob Byrne on November 25, 2014 in Childhood Memories

When fences were lower, fruit and veg was currency and kids just roamed free

How different to today was your neighbourhood and the neighbours as you were growing up?

I was a child in the 50s and neighbourhoods were mainly made up of working class families. Some fathers worked in offices or ran a small local business, while others toiled with their hands in factories, as tradesmen or labourers.

Most mothers stayed at home to look after the children, to cook and clean the house and do the washing and ironing. 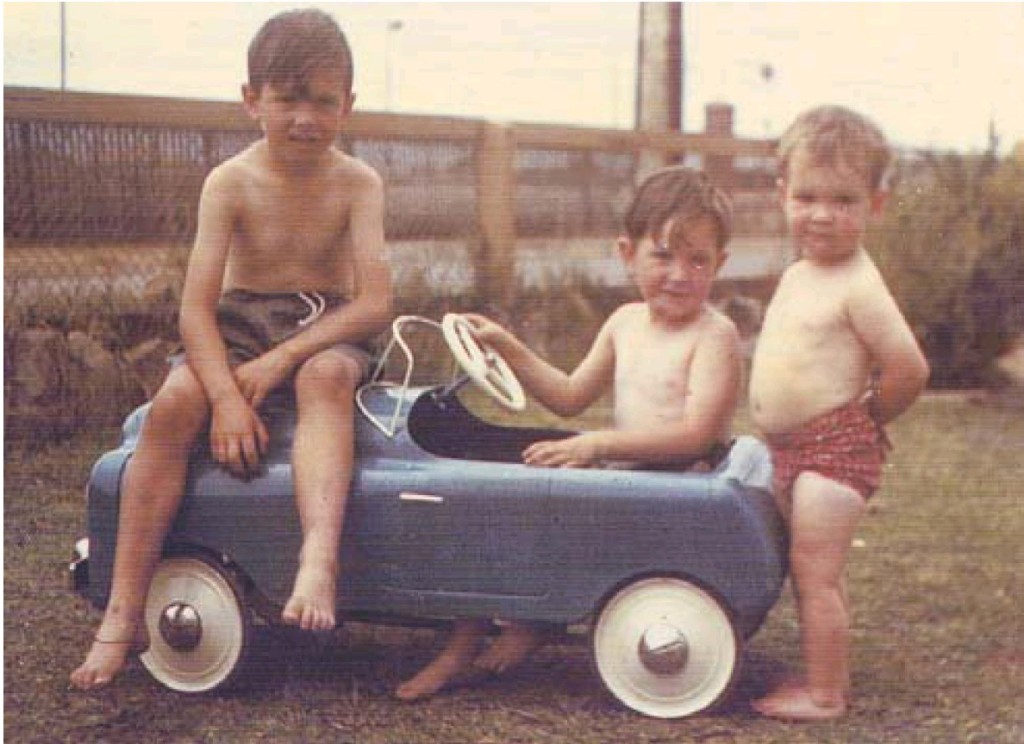 Photo from the Advertiser. There were always lots of other kids to play with. This picture from 1956 shows some boys sharing rides in a Cyclops pedal car

Whenever I think back to those years I’m somehow reminded of summer time and those hot Adelaide nights – no airconditioning or even electric fans – and all the neighbours and their children would sit out on front verandas or front lawns until very late, hoping to catch any cool late-night breeze.

Mums and dads would chat over the front fence, the wireless would be brought out on an extension cord to hear the latest episode of the serials, and mattresses would be dragged out for sleeping.

The streets of our neighbourhood were filled with children. These were the Baby Boomer years, pre-birth control, and families of four and five children were the norm. We were surrounded by many other young families, all around the same ages, so best friends were always in plentiful supply. The streets and backyards were our territory and our parents never seemed to care where we were or who we were with.

We’d spend hours away from home exploring, riding bikes, playing games, making dams in gutters on rainy days and – at times – getting into fights with the kids from the next street over.

Photo from Dale Phillips. Whenever there was a birthday celebrated in the street, there would be a party for all the kids.

Whenever there was a birthday celebrated in the street, there would be a party for all the kids, with raspberry cordial to drink, little cakes in patty pans, chocolate crackles and fairy bread with hundreds and thousands. The decorations were all handmade with crepe paper and there’d be a paper trumpet to blow.

There was always lots of gossip to be traded. My mother and Mrs Neagle from next door would spend hours talking over the back fence about all sorts of things.

Gossip was not the only thing traded over the back fence. Excess fruit and vegies, all grown in backyard gardens, were shared, as were jams and relishes. Mr Jacobs, a few doors down, used to catch and smoke fish which would be traded for some of our hens’ eggs. Mr Scott was an electrician and would repair electrical appliances after work, and could be paid with fruit and vegetables. Very few families had the convenience of a car and those in the neighbourhood who did would be called on in times of emergency to offer transport.

It’s strange that there is now a day set aside to remind people how to be good neighbours (Neighbour’s Day), when it seemed such a normal part of life in the 1950s and ’60s.

While I’m sure there are still great neighbours today, back fences seem to be higher and electric roller doors have created a cocooned existence, where a neighbour is no longer seen, let alone spoken to – how different from our experience growing up with neighbours who were in our lives and almost part of our family.

One Response to Childhood Memories of The Neighbourhood.